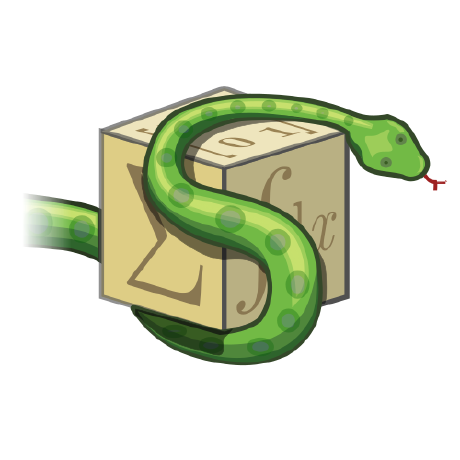 A Python library for symbolic mathematics.

See the AUTHORS file for the list of authors.

License: New BSD License (see the LICENSE file for details) covers all files in the sympy repository unless stated otherwise.

We have community chat at Gitter. Feel free to ask us anything there. We have a very welcoming and helpful community.

The recommended installation method is through Anaconda, https://www.anaconda.com/download/

You can also get the latest version of SymPy from https://pypi.python.org/pypi/sympy/

To get the git version do

For in-depth instructions on installation and building the documentation, see the SymPy Documentation Style Guide.

You can generate everything at the above site in your local copy of SymPy by:

Then the docs will be in _build/html. If you don't want to read that, here is a short usage:

From this directory, start Python and:

SymPy also comes with a console that is a simple wrapper around the classic python console (or IPython when available) that loads the SymPy namespace and executes some common commands for you.

To start it, issue:

from this directory, if SymPy is not installed or simply:

if SymPy is installed.

SymPy has a hard dependency on the mpmath library (version >= 0.19). You should install it first, please refer to the mpmath installation guide:

To install SymPy itself, then simply run:

If you install it system-wide, you may need to prefix the previous command with sudo:

We welcome contributions from anyone, even if you are new to open source. Please read our Introduction to Contributing page and the SymPy Documentation Style Guide. If you are new and looking for some way to contribute, a good place to start is to look at the issues tagged Easy to Fix.

To execute all tests, run:

in the current directory.

For the more fine-grained running of tests or doctests, use bin/test or respectively bin/doctest. The master branch is automatically tested by Travis CI.

To test pull requests, use sympy-bot.

The parser and lexer generated with the ANTLR4 toolchain in sympy/parsing/latex/_antlr and checked into the repo. Presently, most users should not need to regenerate these files, but if you plan to work on this feature, you will need the antlr4 command-line tool available. One way to get it is:

After making changes to sympy/parsing/latex/LaTeX.g4, run:

To clean everything (thus getting the same tree as in the repository):

You can also clean things with git using:

which will clear everything ignored by .gitignore, and:

to clear all untracked files. You can revert the most recent changes in git with:

WARNING: The above commands will all clear changes you may have made, and you will lose them forever. Be sure to check things with git status, git diff, git clean -Xn and git clean -n before doing any of those.

Our issue tracker is at https://github.com/sympy/sympy/issues. Please report any bugs that you find. Or, even better, fork the repository on GitHub and create a pull request. We welcome all changes, big or small, and we will help you make the pull request if you are new to git (just ask on our mailing list or Gitter).

SymPy was started by Ondřej Čertík in 2005, he wrote some code during the summer, then he wrote some more code during summer 2006. In February 2007, Fabian Pedregosa joined the project and helped fixed many things, contributed documentation and made it alive again. 5 students (Mateusz Paprocki, Brian Jorgensen, Jason Gedge, Robert Schwarz, and Chris Wu) improved SymPy incredibly during summer 2007 as part of the Google Summer of Code. Pearu Peterson joined the development during the summer 2007 and he has made SymPy much more competitive by rewriting the core from scratch, that has made it from 10x to 100x faster. Jurjen N.E. Bos has contributed pretty-printing and other patches. Fredrik Johansson has written mpmath and contributed a lot of patches.

In 2011, Ondřej Čertík stepped down as lead developer, with Aaron Meurer, who also started as a Google Summer of Code student, taking his place. Ondřej Čertík is still active in the community but is too busy with work and family to play a lead development role.

Since then, a lot more people have joined the development and some people have also left. You can see the full list in doc/src/aboutus.rst, or online at:

The git history goes back to 2007 when development moved from svn to hg. To see the history before that point, look at https://github.com/sympy/sympy-old.

You can use git to see the biggest developers. The command:

will show each developer, sorted by commits to the project. The command:

will show the top developers from the last year.

To cite SymPy in publications use

A BibTeX entry for LaTeX users is

SymPy is BSD licensed, so you are free to use it whatever you like, be it academic, commercial, creating forks or derivatives, as long as you copy the BSD statement if you redistribute it (see the LICENSE file for details). That said, although not required by the SymPy license, if it is convenient for you, please cite SymPy when using it in your work and also consider contributing all your changes back, so that we can incorporate it and all of us will benefit in the end.