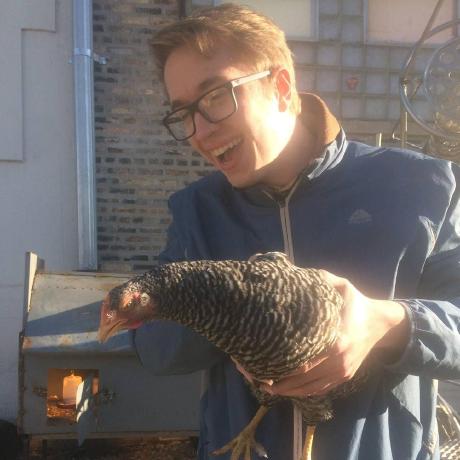 An AX.25 packet radio chat protocol with support for digital signatures and binary compression. Like IRC over radio waves .

Chattervox implements a minimal packet radio protocol on top of AX.25 that can be used with a terminal node controller (TNC) like Direwolf to transmit and receive digitally signed messages using audio frequency shift keying modulation (AFSK). In the United States, it's illegal to broadcast encrypted messages on amateur radio frequencies. Chattervox respects this law, while using elliptic curve cryptography and digital signatures to protect against message spoofing.

With amateur packet radio anyone can pretend to be anyone else. With Chattervox, you can be sure you're chatting with the person you intend to. For more information, check out the FAQ or the discussion about chattervox on hackernews.

UPDATE (March 6, 2019): Check out my slides from the Chattervox workshop at WOPR Summit.

UPDATE (February 25, 2019): I've created a collection of example applications and use cases for the Chattervox protocol here. One example uses Chattervox to access a remote BASH shell on another machine and another shows how you can play Zork I over packet radio. PRs welcome!

UPDATE (October 11, 2018): We've setup a public key registry at chattervox-keys. Once you've generated your public key you can post it there! Chattervox requires a linux computer and a network or serial connection to a TNC to send and receive AX.25 packets. I recommend using Direwolf, a popular software TNC which can be run on the same computer hosting the chattervox application.

You'll also need a radio and a cable to connect the microphone and speaker from the radio to your linux machine. I recommend the following equipment, especially if you're on a budget:

You can also make the cable yourself if you prefer. Check out this zine for instructions.

Installing Direwolf on a Linux machine is easy! Just clone the repo, build the software, and install it on your system.

If you are using MacOS, you can install Direwolf with Homebrew by following the instructions in this Gist (thanks for the edits @danc256).

Windows isn't currently supported, but will be soon!

Binary downloads are available for Linux x64 and x86 architectures on the releases page.

If you have npm, that is the preferred method of install as it allows for the easiest upgrade to the latest version. If you prefer to "build" it from Typescript source and run it as a Node.js app, you can do that as well.

Installing a node package globally may require sudo. If you get a permission denied error, try running the install command again with sudo npm ....

Binary downloads are packaged via Pkg. Chattervox uses a native Node.js addon for serial port communication but Pkg does not yet support bundling .node bindings in their binaries. Therefore, the serialport.node file that comes with the download must live in the same folder as the chattervox binary. If you want to install chattervox globally on your machine you can maintain this relationship by placing chattervox in your PATH using a symlink, or copying both chattervox and serialport.node to /usr/local/bin or wherever your OS looks for programs.

The chattervox packet is primitive and straightforward. It contains a simple header, an optional ECDSA digital signature, and a message payload that can be in plaintext or compressed. As of packet version 1, the protocol is connectionless. There is only one type of packet and there is no mechanism for delivery confirmation (think of it like UDP). It is expected to be transported via AX.25 Unnumbered Information (UI) packets, which the chattervox program relies on for sender and recipient information, as no such fields exists in the packet itself to conserve space.

The protocol may be amended in the future to add new features, however, its simplicity should not be seen as a weakness. The goal of chattervox is singular: Add cryptographic verifiability to text-based radio communication.

For proposed changes to the protocol view the open RFCs.

This repository serves as the first implementation of the protocol. The chattervox command-line tool acts as a client to send and receive chattervox packets in combination with a TNC. This implementation creates a new ECDSA keypair the first time it's run and includes a digital signature for each message (so long as there remains a signingKey in ~/.chattervox/config.json). Each message is temporarily compressed by the client before it's sent in an attempt to measure the efficiency of the DEFLATE compression algorithm. If the compressed version is smaller than the uncompressed version, the compressed buffer is used as the message payload and the compression bit is set in the chattervox packet. If the plaintext version is smaller, no compression is used and the original message text is used as the payload.

Please understand that this software is in beta and I ask for your patience until development stabilizes. While I'm very excited to see that interest in the project is high, It's quite unexpected and I have spent very little time testing the software (aside from automated tests). If you have a problem, please submit a detailed issue and I'll have a look. I'll be writing a tutorial explaining how to get up and running with chattervox very soon.

The protocol is subject to change, and there are several RFCs that indicate the direction it may take in the near future. Currently, there is no protection from replay attacks, so that's something we hope to fix soon!